When we test a new bicycle for our reviews, we commonly hand it over to one of our employees for a week. They are free to ride the bike as often or as little as they choose, and in whatever conditions they feel are appropriate. We trust our in-house "family" to give the bike an honest testing and come back with an unbiased performance report.

Jimmy, our mail-room employee, was selected to test the Breezer Finesse. Jimmy currently rides to work on a high performance commuter bike, so he was pretty cocky about getting an opportunity to pit a new bicycle against his "best bike on the market". 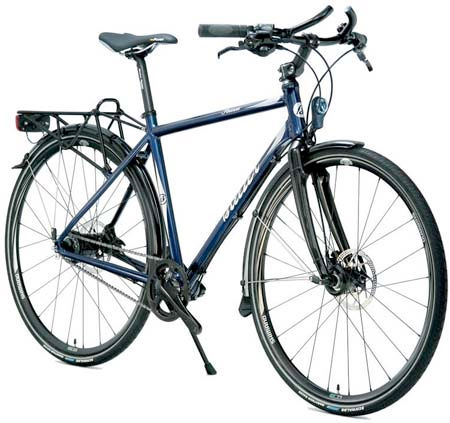 When Jimmy returned to work after having had the Breezer Finesse for a weekend, he was unusually quiet. He admitted only that the bike was "okay". But, by day-three, Jimmy cracked. He admitted he'd hardly been off the bike since he got it. He began his confession by saying: That bike is fast! Initially, he was pleased with the multi-positional handlebars. At only 28 lbs., he said he found the Finesse to be exceptionally comfortable and easy to handle.

On a long ride up in the hills above the city Jimmy was won-over. The Shimano Alfine 8-speed Rapidfire Plus shifting made negotiating our hill country terrain exceptionally easy. Also, he found the Shimano Alpine disc brakes were very responsive.

What finally sold him on the Breezer Finesse was a late evening ride. Jimmy discovered the triple-candlepower Busch & Müller’s headlight was far superior to his standard light.

Jimmy asked us to also mention the many convenience features on the Breezer Finesse. He found he really used the kickstand. The standard fenders kept mud off his back when he got caught in the rain. His only gripe, as far as we can tell, is the bell on the handlebars. We'll give him that. Overall, Jimmy found the Breezer Finesse to be a great bike at a very affordable price.

We would like to thank Commuter Bike Store for providing us with the opportunity to review the Breezer bike brand and look forward to testing more bicycles from them in the future.