Eugene's population has an estimated population 148,595 as of 2006 with an additional 57,065 residents in Springfield, the area has its fair share of beer and micro-breweries. All of the breweries listed below are located within walking distance of the Downtown area. 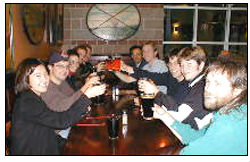 Now open in the former West Brothers/Eugene City Brewery location ~ stop by for lunch and dinner ~ sample from the huge selection of Rogue Ales on tap in Track Town!

High Street Brewery & Cafe opened November 17, 1988 as the first micro brewery in Eugene since Prohibition Days. The Cafe is housed in a renovated 1900's residence with a beautiful backyard Beer Garden. Come and relax under the breeze caressed branches of Apple, Fir, Ash, Hawthorne and Tulip trees in the summer, and feel the warmth of the heaters when enclosed for winter.

Created with the intention of crafting the highest quality beers; Ninkasi hopes to improve the lives of its customers, the residents of its communities, its employees, and business partners. To feed your hunger while enjoying their excellent brew, Ninkasi hosts a choice assortment of some of Eugene's best Food Carts.

A wonderful spot in Eugene, overlooking a serene stretch of the Willamette River near Alton Baker Park. Tiered inside seating and an outside deck provide a beautiful, panoramic view.

In 1979, The North Bank Pub became one of the first buildings constructed along this stretch of the Willamette. John Costello opened the restaurant in April of that year with riverside dining and live jazz by Eugene legend Emitt Williams and others. After a successful 21-year run, Costello handed over the torch to McMenamins, who reopened the North Bank on May 10, 2000.

Born from two brothers with a home-brewing hobby and a love of beer, Oakshire has become an award-winning brewery with beer on draft and in bottles available across the Northwest. Now you can enjoy all of Oakshire's finest craft beers at their new pub in the Whitaker neighborhood of Eugene.

At least a half-dozen ales line the taps here, all made on-premises, including a pale wheat beer and a rye ale (both seasonal), McKenzie Light Ale, Steelhead Amber, Bombay Bomber IPA (highly regarded by many beer-lovers), and Station Square Stout. The original brewer, Teri Fahrendorf, is a Siebel Institute graduate, and has been held in high esteem for the quality of her brews; she's now overseeing brewing throughout the Steelhead empire. New seasonal beers show up occasionally also.