The Heceta Head lighthouse is named after Don Bruno Heceta, a Captain in The Spanish Navy who was exploring the Pacific coast in 1775. The project was completed and lit for the first time in March, 1894. Situated on a cliff, 150 ft. above the sea, considerable work was done to the land to make it level for the lighthouse. The building of the lighthouse took only two years to complete, with many of the materials coming from local and regional suppliers.

The light once again shines from this approximately 55 ft. tower. The Coast Guard donated the lighthouse to the State Parks Department of Oregon after repairing the 8-panel first-order Fresnel lens in 2001. The actual light shines from a height of 205 feet above the sea. This is a view looking out toward the surrounding area from the historic lighthouse.

The entrance to the structure is located on the back side of the lighthouse keeper's office. The room is about 150 sq. ft. and leads directly to the stairs through an arched doorway. The large black cylinder in the center is a representation of the weight that was used to power the rotating motion of the light. Currently, the workings of the light are powered by a 1/2 horsepower electric motor. During it's first 70 years of operation, the light burned 6 gallons of oil per-hour. All fuel had to be carried up the spiral staircase in 5 gallon buckets. The light was powered in this manner until the early 1960's and thus required three lightkeepers to watch over the operation.

The self supporting lighthouse stairs curve around the interior of the structure. The brick walls of the lighthouse are five feet thick at the base and taper to a sturdy 2 feet at the top. There are four platforms on your way up to the peak. Many of the windows have been sealed with concrete to prevent vandalism. There are still four windows remaining on the fourth level of the tower. Here is a photograph looking out one of the windows on the fourth floor. The third landing was used to store supplies and equipment for maintenance of the light and lens.

The head keeper and assistants lived in the mansion that is located, just a few minutes walk, between the beach and the lighthouse. The mansion is now a popular Bed and Breakfast. There were usually 15-20 people living on the property. This included light keepers' families, carpenter, maintenance person and a school teacher for all the children.

The bridge above goes directly into a tunnel. Just down the highway. There is an amazing view of the lighthouse and mansion from a lookout point at the Sea Lion Caves. This is an excellent place to take a photo of the Heceta Head Lighthouse State Scenic Viewpoint. Make sure you visit Heceta Head in the summertime and you may cross paths with a friendly park volunteer who will conduct you on a fun and informative tour of this historic monument.

Below is a night composition of the lighthouse at Heceta Head. 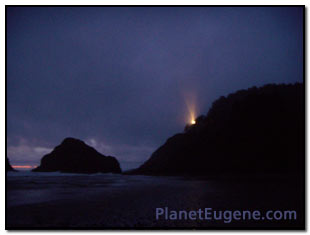