By creating a safe and caring atmosphere, this group helps its members overcome the debilitating effects of accordion addiction.

Performing music inspired by the Middle East and Mediterranean.

Musician Bob Boyers has had a long and rewarding career in the music industry. Bob plays the 'straight-ahead' style of jazz and has a varied knowledge of all the jazz standards, particularly some of the Latin favorites of the 40's and 50's.

Eugene area singer/songwriter Theo Czuk has been called, "...the Kurt Vonnegut of songwriting." and is available for local engagements on Vocals/Piano/Guitar and performing as a solo, duo, trio or quartet.

Ticket information for upcoming concerts and pre-concert talks for the whole family with musical director and conductor Miguel Harth-Bedoya.

Composed of piano, bass, trumpet and drums. Group Therapy plays what is known as 'straight ahead jazz' of the 30s, 40s, and some more contemporary tunes.

Here's the funniest, strangest and most beautiful mixed-marriage of musical styles in Eugene.

Formerly a member of the Renegade Saints.

Eugene musician Eagle Park Slim has been a party to the blues for over 30 years.

Standing in the Middle

Rob is a singer/songwriter who writes, records and plays original music.

Dar has been one of the leading voices in "new folk" since she burst on the scene in the early 1990's. 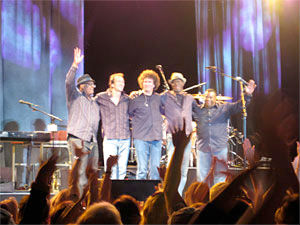